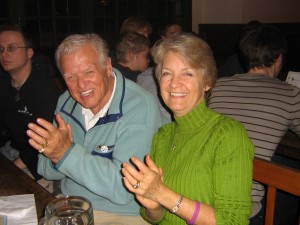 Here we are in Germany having a great time!  But 6 months before that we were wondering if we were ever going to break loose of a stuckness. We planned, dreamed, talked about for over 2 years that we were going to go to back to Europe.  (Jerry had been there 50 years earlier and me 30 years earlier).  But Jerry ended up in the hospital with ecoli (serious case 3 weeks in the hospital) and then he had another health challenge dealing with altitude and his heart.  I began to set our dream of traveling to Europe, let alone the rest of the world on the back, very back burner.

Worse than that I found myself resenting this situation while I was doing everything it took to love him and us through that year.  Then, I realized what I was doing to myself, and us – I was letting more and more of the resentment chisel away my dream of going back to Europe.  I was just letting it build up inside of me, right in the front of my gut.  The more I tried to get rid of it, the more I resented it. Ugg.

What does this have to do with the Ego and Pride?  Well, because both Jerry and I teach positive thinking and self-help and transformational subjects like “Live your Dreams,” this was a drag to find a huge bolder in our path.  So, we STARTED.  I started with myself first.  I TOLD Jerry.  That was where the Ego and pride came in, I did not want to admit that I had a fear, because I felt I should have already be “beyond” that with all my training.  Well, of course he was kind of surprised, but as always, very understanding.  We then could talk about it in the open, and already I was feeling better – inside.  Then we cautiously started to check our the places we wanted to go back to in Germany, the most exciting for both of us.  I won’t go through all the steps, but I will say that the first was the biggest – getting it out in the open and then changing it from a fear into another part of the goal.  Go to Europe and be safe and healthy all the way through.  That was different than just Go to Europe.

The short of it is the picture above!  We had a healthy blast!  That was in March ’08, and we went on to go to Turkey in July.  It was worth every ounce of guts it took to own up that my Ego and pride were trying their best to keep me from love and laughter.  But as usual – I won and we both won, because we addressed the stuckness and turned it around to laughter and love.
If you enjoy these kind of stories, our book website is www.EoutofEGO.com.
Love and hugs,
Donna & Jerry

This entry was posted on Friday, March 27th, 2009 at 2:39 pm and is filed under Uncategorized. You can follow any responses to this entry through the RSS 2.0 feed. Both comments and pings are currently closed.